From the University Press Office

A University of Portsmouth astrophysicist is featured in one of 21 commissioned portraits of leading women by the Royal Astronomical Society (RAS).

Dr Jen Gupta, the SEPnet/Ogden Outreach Officer from the University’s Institute of Cosmology and Gravitation (ICG), appears alongside other prominent women in astronomy, space science and geophysics. 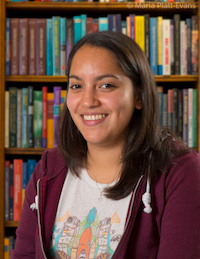 The portraits were commissioned to celebrate the 100-year anniversary of women finally winning the right to be elected to fellowship of the RAS.

Dr Gupta said: “It’s an absolute honour to be included in this portrait exhibition among so many leading women in modern-day astronomy. The portraits show a mix of female scientists at different stages of their careers, and it’s humbling to feature alongside some incredible scientists who I greatly admire.

“It’s staggering to think that early female astronomers had to fight so hard and for so long to gain recognition for their work, particularly as today’s RAS is so committed to improving the diversity of the astronomical community. I hope this important anniversary encourages even more girls and young women to study astronomy.”

The forerunner of the RAS, the Astronomical Society of London was set up in 1820 by a group of men meeting in a pub. From the outset, no thought was given to the idea that women could or should become members – ‘Fellows’ – of the new organisation.

It took the tumultuous social change of the First World War, and the essential movement of women into previously ‘male’ jobs, to overturn the restrictions of the first century of the RAS.

With an overwhelming vote at its 1915 AGM, the Society paid for and organised the approval by the Privy Council of a Supplemental Charter, which came into force in June that year and paved the way for women to finally be admitted to Fellowship.

Professor Bob Nichol, Director of ICG, said: “I’m thrilled and proud that one of our outstanding female astronomers appears in this exhibition. We are committed to promoting women in science and Dr Gupta’s recognition is wonderful news for her and for the University.”

The full photographic exhibition can be found on the RAS website.