From the University Press Office:

An international team of astronomers has created the largest ever three-dimensional map of distant galaxies in a bid to help them understand one of the most mysterious forces in the universe.

Scientists including a team led by Dr Florian Beutler at the University of Portsmouth’s Institute of Cosmology and Gravitation have spent a decade collecting measurements of 1.2 million galaxies as part of the Sloan Digital Sky Survey III (SDSS-III). 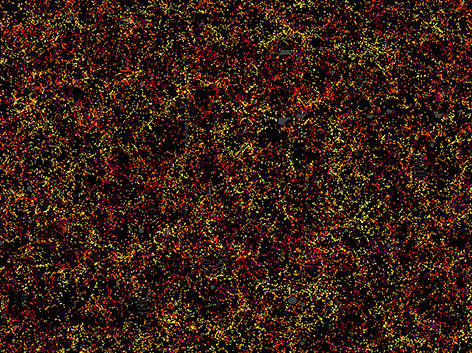 A slice through the map of the large-scale structure of the Universe from the Sloan Digital Sky Survey and its Baryon Oscillation Spectroscopic Survey. Each dot indicates the position of a galaxy six billion years into the past. Image: Daniel Eisenstein and SDSS-III.

This will allow them to make the most precise measurements to date of ‘dark energy’ – the force that is driving the accelerated expansion of the universe.

Dr Beutler said: “This extremely detailed three-dimensional map represents a colossal amount of work. The University of Portsmouth has worked with partner institutions for ten years, helping to gather measurements of galaxies making up a quarter of the sky. 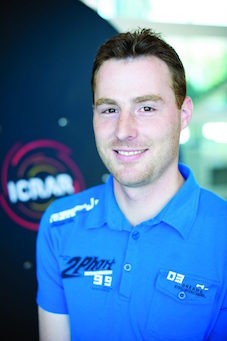 “Using this map we will now be able to make the most accurate possible measurements of dark energy, and the part it plays in the expansion of the universe.”

The new measurements were carried out by the Baryon Oscillation Spectroscopic Survey (BOSS) program of SDSS-III.

A collection of papers describing these results was submitted this week to the Monthly Notices of the Royal Astronomical Society.

BOSS measures the expansion rate of the Universe by determining the size of the baryonic acoustic oscillations (BAO) in the three-dimensional distribution of galaxies.

The original BAO size is determined by pressure waves that travelled through the young universe up to when it was only 400,000 years old (the universe is presently 13.8 billion years old), at which point they became frozen in the matter distribution of the universe.

Measuring the distribution of galaxies since that time allows astronomers to measure how dark matter and dark energy have competed to govern the rate of expansion of the universe.

To measure the size of these ancient giant waves to such sharp precision, BOSS had to make an unprecedented and ambitious galaxy map, many times larger than previous surveys.

At the time the BOSS program was planned, dark energy had been previously determined to significantly influence the expansion of the universe starting about 5 billion years ago. BOSS was thus designed to measure the BAO feature from before this point (7 billion years ago) out to near the present day (2 billion years ago).

Dr Beutler said: “If dark energy has been driving the expansion of the universe over that time, our maps tells us that it is evolving very slowly, if at all. The change is at most 20 per cent over the past seven billion years.”

The map also reveals the distinctive signature of the coherent movement of galaxies toward regions of the universe with more matter, due to the attractive force of gravity. Crucially, the observed amount of infall is explained well by the predictions of general relativity. This agreement supports the idea that the acceleration of the expansion rate is driven by a phenomenon at the largest cosmic scales, such as dark energy, rather than a breakdown of gravitational theory.

Dr Jeremy Tinker, of New York University, added: “BOSS has marked an important cosmological milestone, combining precise clustering measurements of an enormous volume with extensive observations of the primary cosmic microwave background to produce a firm platform for the search for extensions to the standard cosmological model.

“We look forward to seeing this programme extended with the coming decade of large spectroscopic surveys.”

Funding for SDSS-III has been provided by the Alfred P Sloan Foundation, the participating institutions, the National Science Foundation, and the US Department of Energy Office of Science.