This news item is slighted edited from a University of Portsmouth press release.

Visually impaired people were able to ‘see’ the Universe this weekend at a galaxy workshop run by University of Portsmouth astrophysicists. 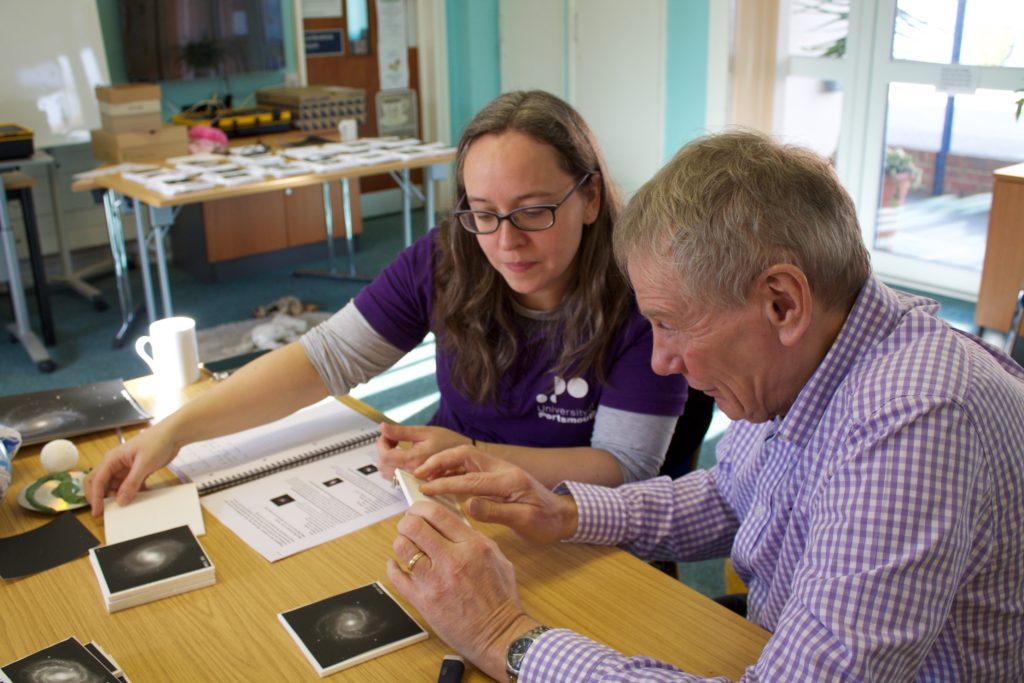 Astrophysicist Dr Karen Masters with one of the workshop participants

The Tactile Universe pilot event was organised by the University’s Institute of Cosmology and Gravitation to engage the blind and visually impaired (BVI) community with astrophysics research.

Participants touched 3D printed images of galaxies and models of astronomical objects to learn about different astronomy concepts such as galaxy morphology and stellar populations, and what they can tell us about galaxy formation and evolution.

Project lead and blind astronomer Dr Nicolas Bonne said: “I know from personal experience that vision impaired people can feel excluded from this traditionally visual subject. It’s easy to forget that the galaxies I study are invisible to everybody without the use of a telescope.

“We trialled some of the 3D galaxy models at a recent University outreach event at which there was one little girl with no vision. She said it was the first time that she felt like she was doing the same science activity as the rest of her class. It was really nice to be able to help somebody feel included in learning about such a fascinating subject, and we hope this project will encourage people from the BVI community to engage with the wonders of astronomy.” 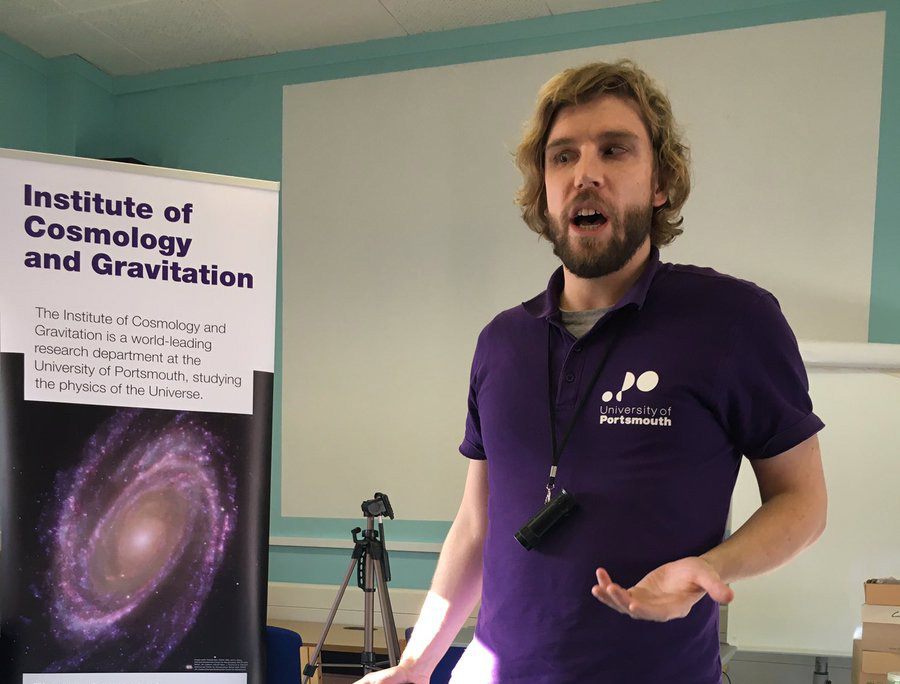 Nicolas and his colleagues printed 3D galaxies by scaling their brightness vertically. This means that the brighter parts of galaxies are higher and participants can feel the models to determine the shapes and compositions of these astronomical objects.

Nicolas said: “I’ve been working with a vision-impaired social group at Southsea library to help prepare for these workshops and it’s been a brilliant learning experience for me to really think about how to translate astronomy research. 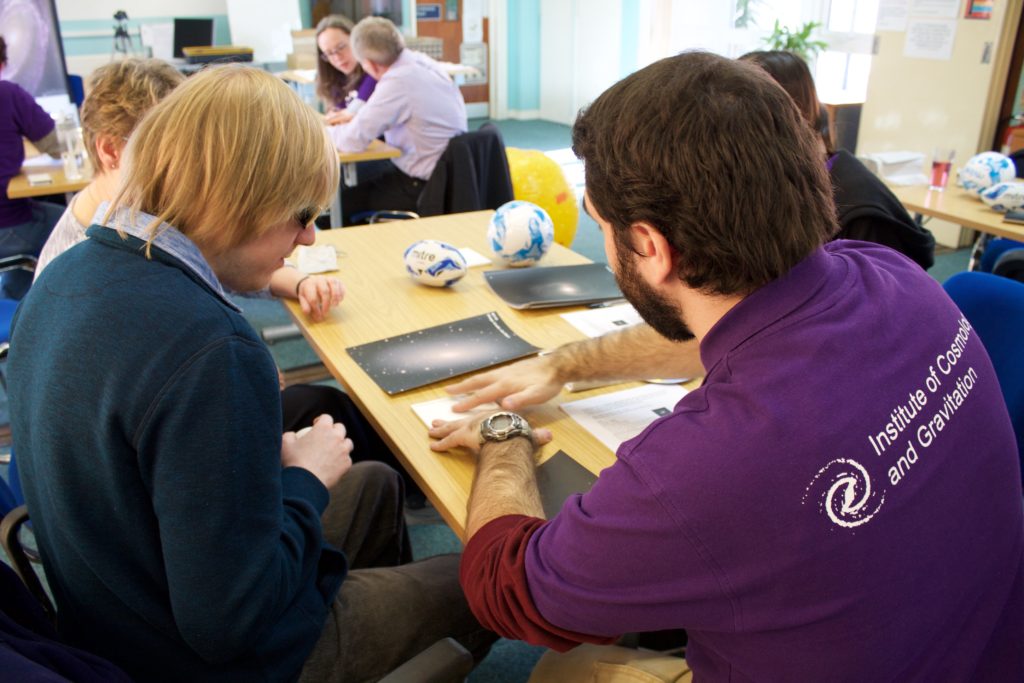 Participants touched 3D printed images of galaxies and models of astronomical objects to learn about different astronomy concepts. Here Coleman Krawczyk, who taking the lead on the techniques for the 3D printing talks with one of the participants.

“For example, people who have never had vision don’t have a concept of what different colours are, so you have to describe galaxies by using concepts like star ages and temperatures instead. It really challenges you to think about how you communicate.”

One of the aims of the project is to create a set of versatile resources that can be used free of charge by the wider astronomy outreach and BVI communities in school lessons and at community family events. 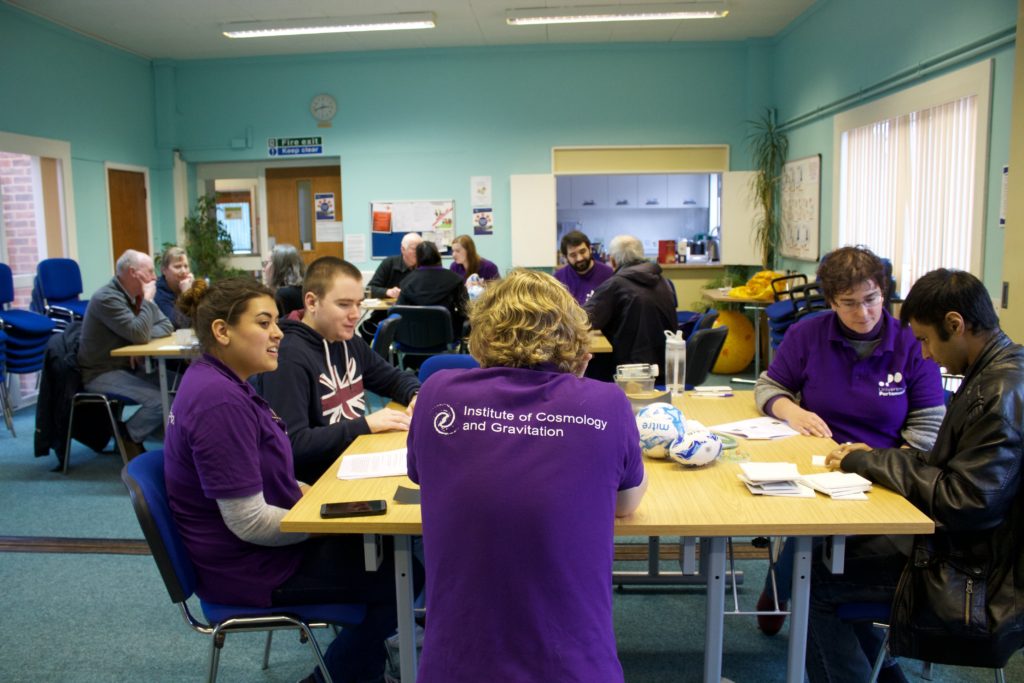 Astronomers from the Institute of Cosmology and Gravitation (shown are Violeta Gonzalez-Perez, Lucy Newnham and Nic Bonne) help participants engage with the 3D printed galaxies