We are pleased to announce that the 30th Texas Symposium on Relativistic Astrophysics will take place from Sunday 15th to Friday 20th December 2019 in Portsmouth, UK.

The Texas meetings have covered topics such as black holes, gravitational waves, neutron stars, cosmic rays, dark matter and the early Universe since the first symposium, held in Dallas in 1963. The Symposium will include both invited and contributed talks and posters.

The 2019 meeting will be hosted by the University of Portsmouth’s Institute of Cosmology and Gravitation.

Conference information will be posted on the symposium website http://texas2019.org, where you can sign up for future announcements.

For any queries please contact the organisers at texas2019[AT]port.ac.uk

We look forward to welcoming you to Portsmouth,
Marco Bruni and David Wands
(chairs of the scientific and local organising committees)

The ICG will be hosting the next South Coast Cosmology meeting on 16th January 2019 in Lecture Theatre 3, Richmond Building (see https://www.port.ac.uk/about-us/maps-and-directions for travel information, Richmond is labelled 6 on the map).

Registration is via this online form. Participants are welcome to submit abstracts for talks, and we especially encourage PhD students to do so as this meeting will provide a relaxed environment in which to give a talk.

Registration is now closed. Please see below for the schedule.

16:30 onwards: Discussion to continue at the pub!

Researchers from the University of Portsmouth have come up with a new measurement of one of the most debated topics in cosmology.

Three cosmologists from the University’s Institute of Cosmology and Gravitation analysed new data to provide one of the most accurate measurements of the Hubble Constant to date.

The Hubble Constant has a long and contentious history with famous disagreements between astronomers, with people still debating its value after nearly a century of measurements.

The Hubble Constant is the local expansion rate of the Universe and is the cornerstone of modern cosmology. This expansion rate was first measured by Edwin Hubble in 1929 and is known as Hubble’s Law. A key part of this law is Hubbles’ Constant, which represents the exact expansion rate now (i.e., how fast space is expanding in our local cosmic neighbourhood).

Professor Bob Nichol, Acting Pro Vice-Chancellor (Research and Innovation) and co-author of the study, said: “We have used this new data, and new methodology, to obtain one of the most accurate measurements of this constant to date. In fact, I’m surprised how good it is.

“Our value does not agree with local measurements of the Hubble Constant which could be telling us something fascinating about our Universe.”

The study is one of eight new papers presenting exciting results from DES, of which the University of Portsmouth is an institutional member (in 2006). They will be presented at a special DES meeting at the Royal Astronomical Society in London today (9 November).

Professor Nichol and his ICG colleague Ed Macaulay are co-authors on a number of these papers and are lead authors on the Hubble Constant study, with Professor David Bacon, also from ICG.

They will be joined by two PhD students Benjamin Thomas and Maria Vincenzi who will also be presenting their supernova results at the meeting.

Several ICG researchers attended the 4th CosKASI-ICG-NAOC-YITP workshop on Frontiers of Cosmology. This is the fourth workshop organised by the four institutes. This time, the workshop was held at National Astronomical Observatories of China in Beijing. There were around 60 participants including many Chinese students.

The programme of the workshop can be found here:

The workshop was organised by Gong-bo Zhao and Jian Li at NAOC. 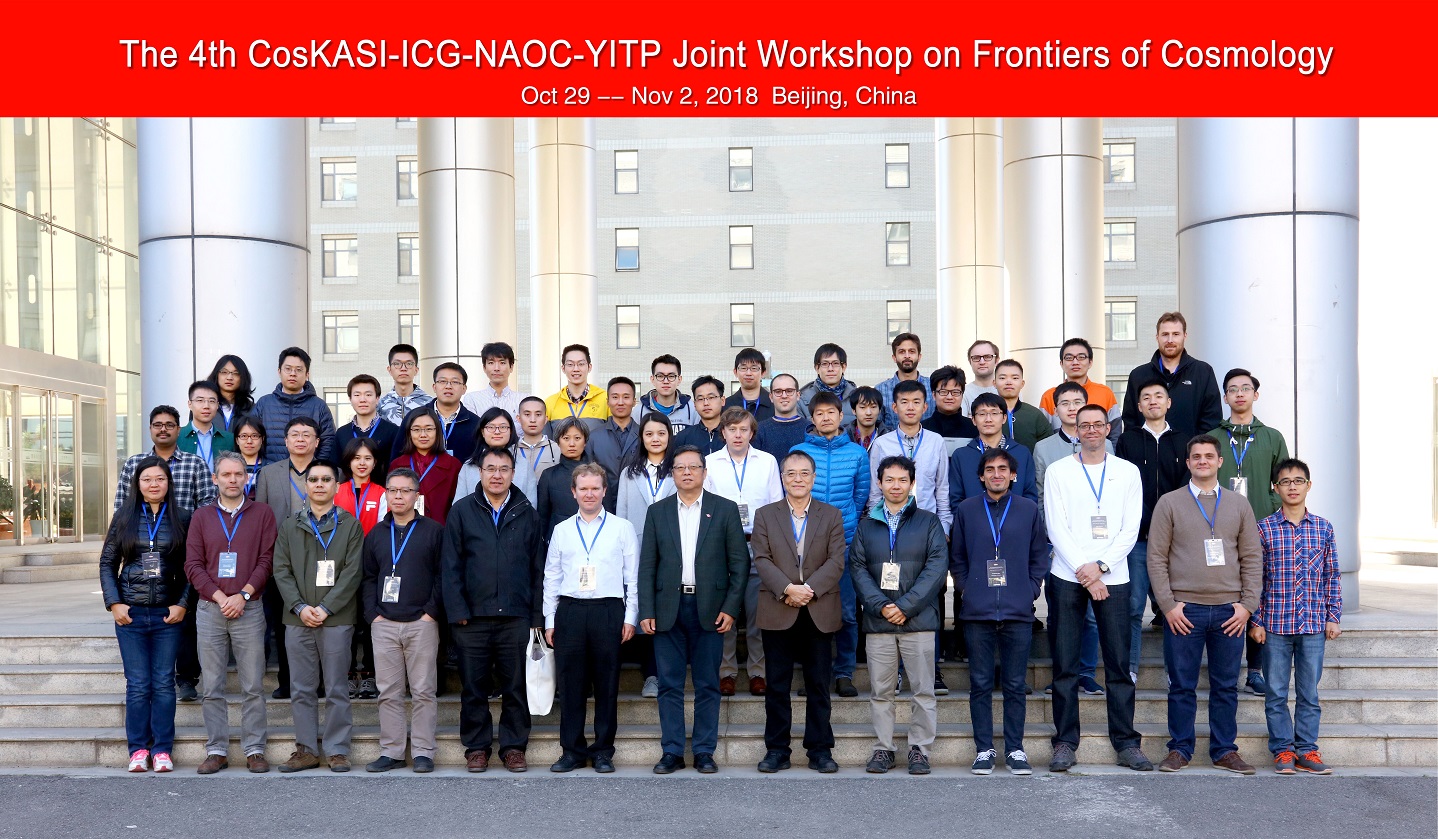 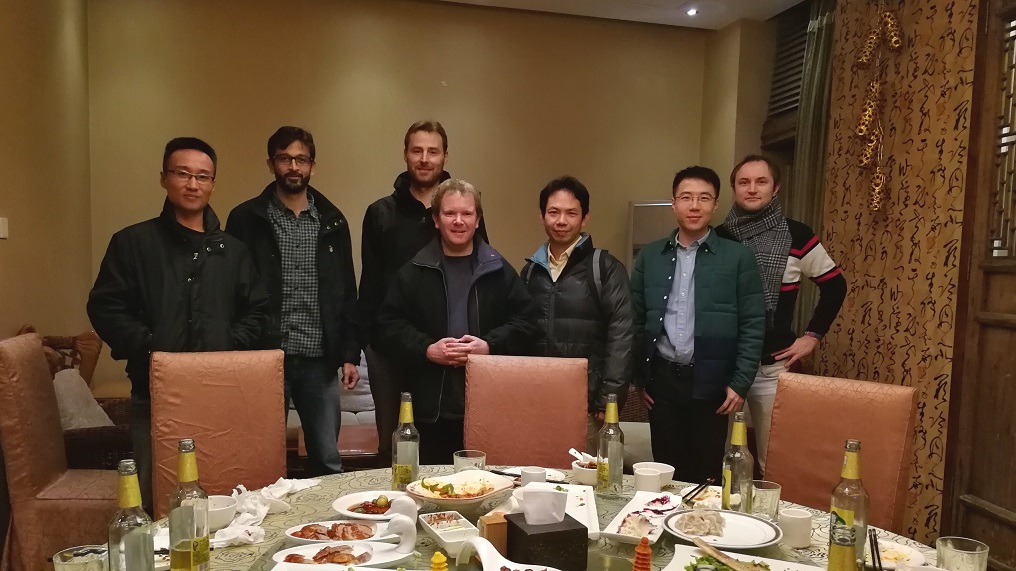 ICG researcher’s project supported by the European Research Council (ERC) has been highlighted in the EU research and innovation magazine “Horizon”:

The ERC funded project “CosTesGrav” led by Prof. Koyama aims to develop cosmological tests of gravity and seek solutions to the origin of the observed accelerated expansion of the Universe by challenging conventional General Relativity. This project will exploit ICG’s involvement in international astronomical surveys such as European Space Agency’s Euclid mission.

The hot weather could not melt the enthusiasm of our placement and internship students. In the week July 16-25 Samuel Richardson from UTC Portsmouth and Dominic Hanley 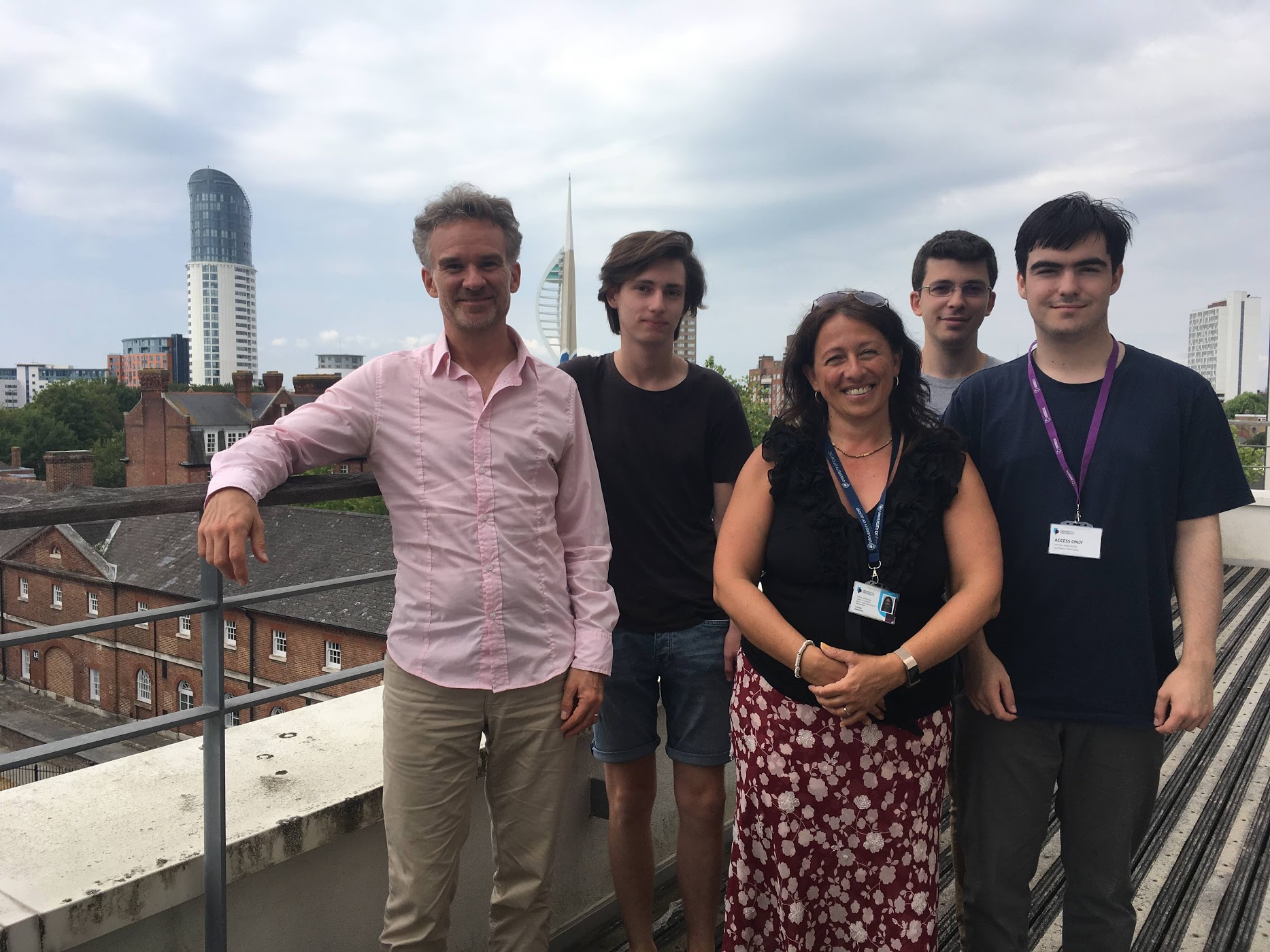 from Oaklands catholic school have worked with ICG PhD student Pierandrea Guarnieri under the supervision of Profs. Maraston and Thomas, on determining the robustness of redshift determinations, in particular studying the factors determining their quality.

From July 3 to 25, Portsmouth Physics student Sophie-Louise Courtney has started to learn how to derive the physical parameters of stellar spectra working with Dr. Sofia Meneses-Goytia under the supervision of Prof. Maraston. Sophie has even written a report and will be ready to start her Master in September. 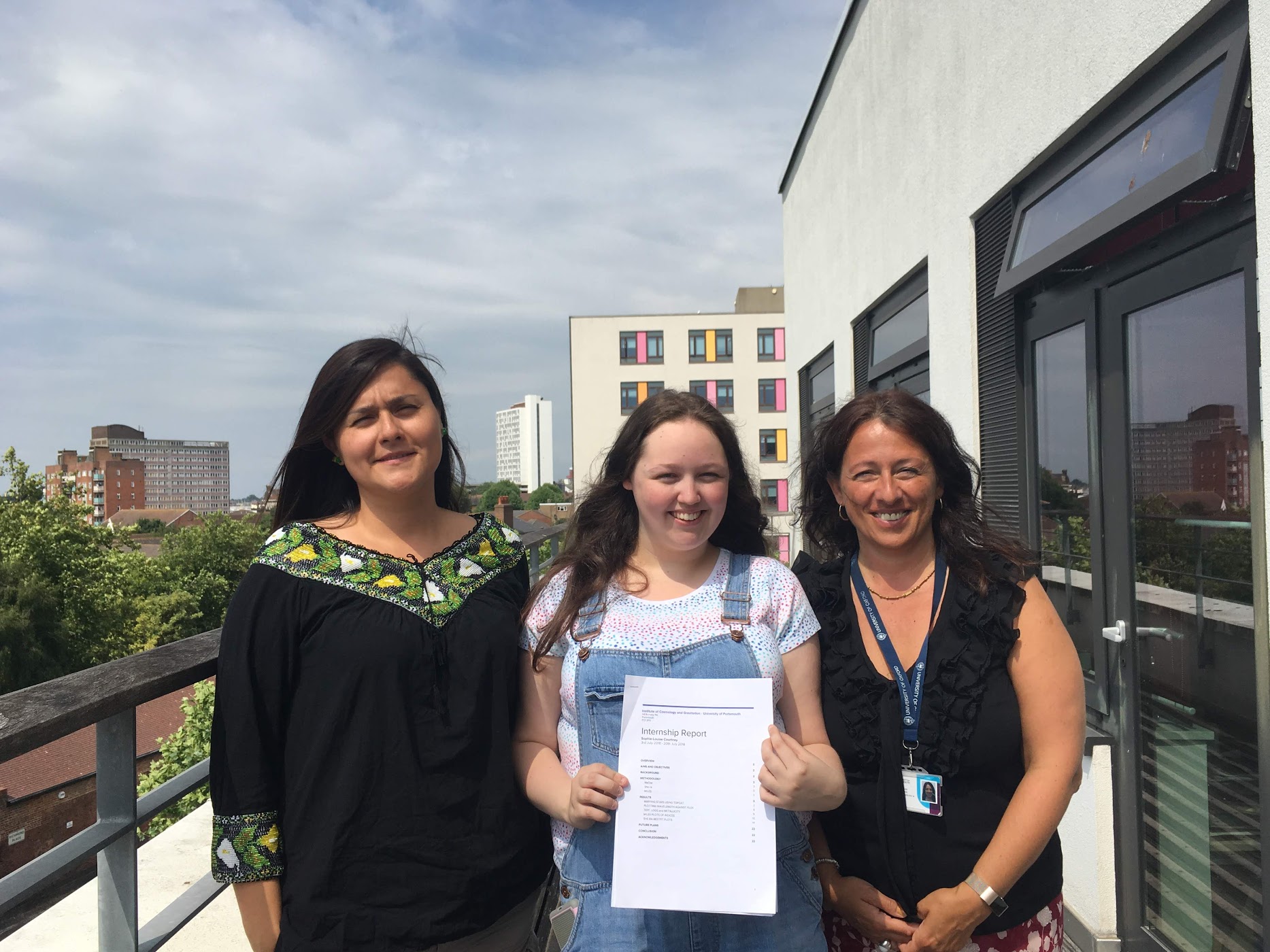 It was a pleasure to host these hard working students and we wish them all the best for their future!

In 1915 Albert Einstein proposed his general theory of relativity (GR) to explain how gravity works. Since then GR has passed a series of high precision tests within the solar system, but there have been no precise tests of GR on large astronomical scales.By combining data taken with NASA’s Hubble Space Telescope and the European Southern Observatory’s Very Large Telescope, their results show that gravity in this galaxy behaves as predicted by Albert Einstein’s general theory of relativity, confirming the theory’s validity on galactic scales.

It has been known since 1929 that the Universe is expanding, but in 1998 two teams of astronomers showed that the Universe is expanding faster now than it was in the past. This surprising discovery – which won the Nobel Prize in 2011 – cannot be explained unless the Universe is mostly made of an exotic component called dark energy. However, this interpretation relies on GR being the correct theory of gravity on cosmological scales. Testing the long distance properties of gravity is important to validate our cosmological model.

A team of astronomers, led by Dr Thomas Collett of the Institute of Cosmology and Gravitation at the University of Portsmouth, used a nearby galaxy as a gravitational lens to make a precise test of gravity on astronomical length scales.

A few hundred strong gravitational lenses are known, but most are too distant to precisely measure their mass, so they can’t be used to accurately test GR. However, the galaxy ESO325-G004 is amongst the closest lenses, at 500 million light years from Earth.Dr Collett said: “General Relativity predicts that massive objects deform space-time, this means that when light passes near another galaxy the light’s path is deflected. If two galaxies are aligned along our line of sight this can give rise to a phenomenon, called strong gravitational lensing, where we see multiple images of the background galaxy. If we know the mass of the foreground galaxy, then the amount of separation between the multiple images tells us if General Relativity is the correct theory of gravity on galactic scales.”

Dr Collett continues: “We used data from the Very Large Telescope in Chile to measure how fast the stars were moving in E325 – this let us infer how much mass there must be in E325 to hold these stars in orbit. We then compared this mass to the strong lensing image separations that we observed with the Hubble Space telescope and the result was just what GR predicts with 9 per cent precision. This is the most precise extrasolar test of GR to date, from just one galaxy.”

“The Universe is an amazing place providing such lenses which we can then use as our laboratories,” adds team member Professor Bob Nichol, Director of the Institute of Cosmology and Gravitation. “It is so satisfying to use the best telescopes in the world to challenge Einstein, only to find out how right he was.”

The research is published in the journal Science. The work was funded by the University of Portsmouth and the UK Science and Technologies Funding Council.

A University of Portsmouth project is helping blind and visually impaired children to ‘feel’ the Universe.

The Tactile Universe has been developed by the University’s Institute of Cosmology and Gravitation to engage the blind and visually impaired community with astrophysics research.

It involves a series of 3D printed images of galaxies that allow blind and visually impaired children to ‘see’ the Universe by feeling the shapes of these astronomical objects.

Project lead and visually impaired astronomer Dr Nicolas Bonne said: “I’ve had my eye condition from birth, and I decided that I wanted to be an astronomer at the very young age of 5. My parents and teachers were pretty supportive and they did everything that they could to help me learn about what is fundamentally a very visual science. This wasn’t always easy though, and this was often due to limited accessible astronomy resources for people with vision impairments.

“In astronomy books and TV shows, whenever anybody wants to talk about how awe inspiring the Universe is, they tend to show beautiful pictures of space to make their point. I wanted to make something that could help to inspire and teach people in the same way, regardless of whether they can see or not.”

A 3D printed model of a galaxy.

Dr Bonne and his colleagues print 3D galaxies by scaling their brightness vertically, this means that the brighter parts of galaxies are higher. Participants touch the 3D models to learn about different astronomy concepts such as galaxy shapes and the colour of their stars, and what they can tell us about galaxy formation and evolution.

The project began in July 2016, and since 2017 it has been engaging children in two Hampshire schools with a resource provision for pupils with visual impairment – Toynbee School in Chandler’s Ford and Kings Copse Primary School in Hedge End.

The Tactile Universe has recently received a prestigious £45,000 Nucleus Award from the Science and Technology Facilities Council (STFC) to make their resources available free of charge to the wider astronomy outreach and blind and visually impaired communities, for use in school lessons and at community family events across the UK. The funding success was thanks to the team developing partnerships with the Royal National Institute of Blind People (RNIB), the Royal Astronomical Society, the South East Physics Network (SEPnet) and The Ogden Trust.

Jenna Maunder and Azam Sumra from Tonybee School in Southampton ‘feel’ the Universe through 3D printed models of galaxies.

Dr Jen Gupta, Public Engagement and Outreach Manager for the Institute of Cosmology and Gravitation, said: “It has been great working in local schools and seeing how much the pupils have got out of our Tactile Universe activities, regardless of their level of vision. I’m delighted that the significance of the project has been recognised by STFC through this funding, and can’t wait to help make astronomy accessible to any child with a vision impairment in the UK and beyond.”

Dr Coleman Krawczyk, Technical Lead for the Tactile Universe, added: “The Tactile Universe is the most rewarding project I have been a part of. I’m excited that this funding means that the tools we’ve developed can be used to make astronomy accessible to children with vision impairments for years to come.”

This news story was reproduced from the University of Portsmouth Press Office. Click here to see the original article.