Over 5,500 members of the public joined amateur astronomers, ICG members and colleagues from other local Universities and BBC presenters for the Portsmouth Stargazing Live 2014 event last night. The event, held at the Portsmouth Historic Dockyard in conjunction with the BBC is one of only three nationwide events that BBC Learning are running this week to tie in with the TV show (which is filmed at Jodrell Bank). The Institute of Cosmology and Gravitation at the University of Portsmouth was the main academic partner for the Portsmouth live event.

This event builds on the ICG involvement with Stargazing LIVE. For the third year in a row, lecturers and students from the ICG have offered their time to the public for a free evening of stargazing, space activities and cosmology chat tied into the BBC Stargazing LIVE programme. In 2012 we collaborated with BBC South Learning to run at event at The Spinnaker Tower, while in 2013, the first event held on board HMS Warrior 1860 in the Historic Dockyard was run independently by ICG as a “Partner Event”. 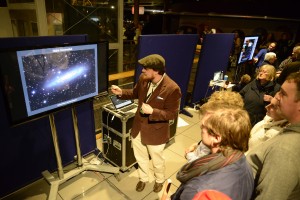 Ashley Ross explains an image of a galaxy in Mission Control 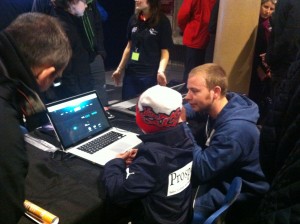 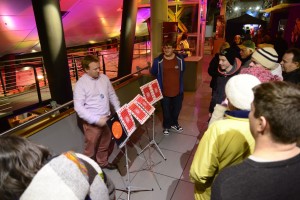 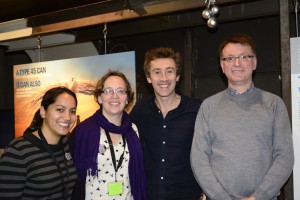 ICG staff and students and Applied Physics undergraduates were also joined by staff and pupils from The Portsmouth Grammar School to demonstrate science experiments including demonstrating the colours of stars using coloured gas lamps.

Other events on offer last night included the opportunity to learn about how the universe began, train like an astronaut, explore the scale of our solar system, find out how we navigated the seas before modern technology, and look through powerful telescopes on the deck of HMS Warrior 1860. There was also science comedy and music for everyone including a performance from the Portsmouth Military Wives.

Here’s the UoP Press release about the event. The Portsmouth News also covered it. Both Jen Gupta and Karen Masters along with many others at the event talked about it on yesterday’s Radio Solent Drive Time with Steve Harris.

A short film of highlights from the event (including shots of one of the Astro Academy events with Karen Masters and Jen Gupta) can be seen about 6 minutes into the Wednesday Jan 8th BBC StargazingLIVE TV show.

Finally we have made a Storify of all the mentions of the event on Twitter.