The world of cosmology has been a-buzz this week with the first claimed detection of gravitational waves (ripples in the fabric of spacetime) imprinted in the most distant light in the universe – the cosmic microwave background. The presence of primordial gravitational waves is a distinctive prediction of cosmic inflation – the idea that our entire observable universe emerged from a burst of accelerated expansion in the very early universe. If confirmed, the results from BICEP2 could offer the first direct evidence of inflation at ultra-high energy scales.

A team from the BICEP2 experiment announced their results at a press conference at Harvard Center for Astrophysics this Monday, 17th March. ICG researchers then had a hectic day first digesting the scientific results and then talking to journalists from the national press, including the Daily Telegraph and the Financial Times, to explain their significance.

Within hours, Rob Crittenden had written an article for The Conversation which is now available online.

Later in the day, ICG Director David Wands, was interviewed about the results live on the BBC News channel. 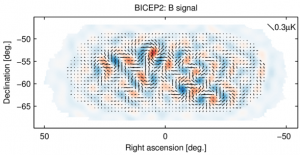 The results come from studying the polarisation of light from the cosmic microwave background. Gravitational waves emit a distinctive curl in the polarisation pattern (above) which is seen in the BICEP2 data collected over the last three years at the South Pole. The results caught the scientific community by surprise because at first sight they appear to be in tension with results released last year by the European Space Agency Planck satellite. However Planck will release their own polarisation data by the end of this year and, if the signal is as large as is claimed by BICEP2, the existence of primordial gravitational waves should be confirmed (or contradicted) by Planck.