The ICG is pleased to announce that Dr Karen Masters has been promoted to Reader in the latest round of annual promotions by the university. 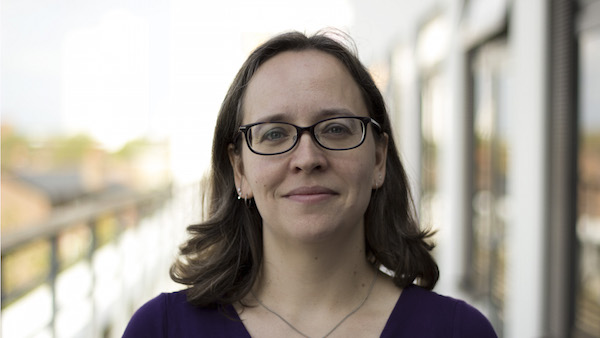 Karen uses information from large surveys of the sky to search for clues about how galaxies formed and evolve over cosmic time. This includes information on the shapes and types of galaxies provided by citizen scientists via the Galaxy Zoo project (www.galaxyzoo.org). Dr. Masters has been a member of the Galaxy Zoo science team since 2008, and Project Scientist since 2013.

Karen is also a member of the Sloan Digital Sky Survey – the survey which provided the original images for Galaxy Zoo. She is Director of Outreach and Public Engagement for SDSS as well as having leading role in the MaNGA (Mapping Nearby Galaxies at APO) survey which has just recently started observations on the Sloan telescope.

Karen moved to the ICG in 2008 as a postdoc, and her position was supported by a series of prestigious fellowships for several years (the 2008 IAU Fellowship from the Gruber Foundation, a 2010 Early Career Fellowship from The Leverhulme Trust and since 2012 a Faculty Funded Research Fellowship), before she became a Senior Lecturer in October 2014. Prior to working at ICG, Dr. Masters was a postdoc at the Harvard-Smithsonian Center for Astrophysics in Boston, USA where she worked with Prof. John Huchra on the 2MASS Redshift Survey, and initiated the 2MASS Tully-Fisher survey. Dr. Masters obtained her PhD on “The Velocity Field in and Around the Local Supercluster” in 2005, working under the supervision of Prof. Martha Haynes at Cornell University.