From the University Press Office
A new study published in the journal Nature has found out why a mysterious kind of ‘galactic warming’ has prevented stars from forming in thousands of galaxies.

A team of international astronomers announced the discovery of a new class of galaxies called ‘red geysers’, which can keep gas in these dormant galaxies too hot and energetic to form stars.

The red geysers harbour supermassive black holes with winds that have the power to prevent the formation of stars.

The research is published by astronomers from the Sloan Digital Sky Survey (SDSS), which has created the most detailed three-dimensional maps of the Universe ever made. 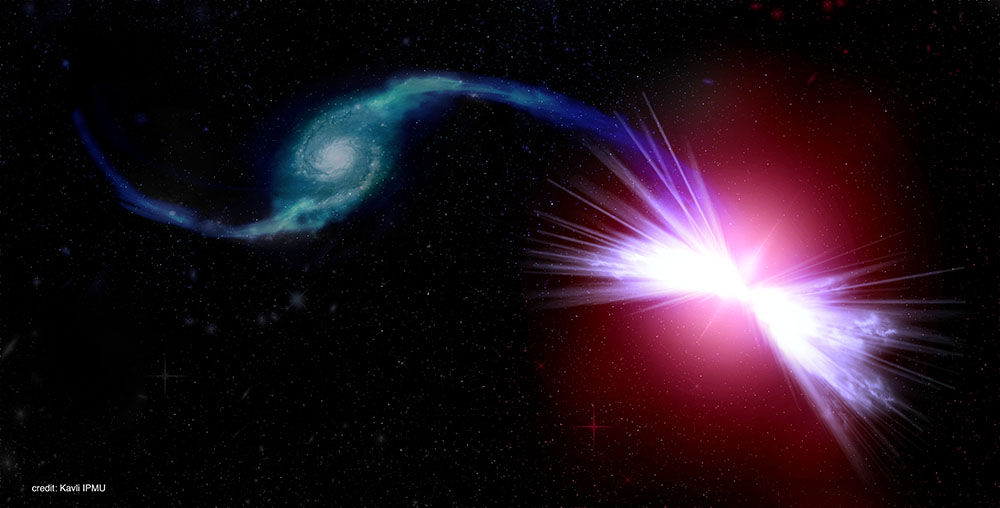 An artist’s rendition of the galaxies: Akira (right) and Tetsuo (left) in action. Akira’s gravity pulls Tetsuo’s gas into its central supermassive black hole, fueling winds that have the power to heat Akira’s gas. The action of the black hole winds prevents a new cycle of star formation in Akira. Image Credit: Kavli IPMU

Dr Kyle Westfall is one of the paper’s authors from the University of Portsmouth’s Institute of Cosmology and Gravitation, which is a member of SDSS. He said: “At Portsmouth we’re delighted to be taking the lead on the data analysis software for this major international survey.

“Our work makes it possible for scientists across the world to make discoveries like this one, which provides the first evidence of an important route for stopping star-formation in nearby galaxies.”

Astronomers had long suspected that the reason had something to do with the supermassive black hole found at the centres of many galaxies, but solid evidence was lacking. One reason was that it used to be difficult to map the internal structure and motions of gas and stars throughout a galaxy.

Edmond Cheung, an astronomer at the University of Tokyo’s Kavli Institute for the Physics and Mathematics of the Universe, led the study. He was working with a team of astronomers studying hundreds of galaxies when they caught a supermassive black hole blasting away at the cold gas in its host galaxy.

He said: “We knew there had to be a way to prevent star formation in these galaxies, and now we have a good idea of what it is. If we looked just at the centre of the galaxy like we used to, we could have learned about the central black hole, but we would have missed the story of how it affects the rest of the galaxy.

“The wind from supermassive black holes also comes and goes quickly, so catching the wind red-handed is hard.”

Kevin Bundy, co-author on the study and Principal Investigator of the new SDSS campaign that led to the discovery, said: “Galaxies start out as star-making machines with a simple recipe: gas plus gravity equals stars. Here we have a galaxy that has everything it needs to form new stars, but is dormant. Why is that?”

The secret to capturing the whole story is the SDSS’s new component survey, Mapping Nearby Galaxies at Apache Point Observatory (MaNGA).

“With MaNGA’s technological upgrade to the Sloan Foundation Telescope, we can make detailed maps of galaxies ten to a hundred times faster than we could just ten years ago,” says Renbin Yan of the University of Kentucky, a co-author of the study and MaNGA’s Survey Scientist. “Since MaNGA studies so many galaxies, our snapshots can reveal even the quickest changes happening in galaxies. And that’s how we found Akira.”

Cheung nicknamed this premier example of a red geyser galaxy Akira after the famous Japanese manga comic character, an homage to both the MaNGA survey and his home institution in Japan. Akira has a companion galaxy that Cheung called Tetsuo for another character in the same manga.

Akira is pulling gas away from Tetsuo, which fuels Akira’s supermassive black hole winds. The winds driven by Tetsuo’s gas are the reason that Akira is currently a red geyser galaxy.

Bundy came up with the name “red geyser” because these wind outbursts reminded him of the sporadic eruptions of a geyser and because the failure to form new stars leaves the galaxy with only red stars.

As with global warming on Earth, galactic warming has long-term consequences for red geyser galaxies – their gas can no longer form new stars. “You can think of these winds as super-heating the atmospheres of galaxies,” Cheung says. “As soon as any gas starts to cool, it gets blasted by this wind, like water droplets turning to steam.”

The team theorises that this phenomenon is quite common in dormant galaxies. Therefore, our own Milky Way galaxy may not be safe from this galactic warming – distant future generations may see our supermassive black hole turning our galaxy into a red geyser.