This news item is slightly edited from a University of Portsmouth press release, and a Sloan Digital Sky Survey press release.

The results, presented at the 231st meeting of the American Astronomical Society, are particularly important because dwarf galaxies (those composed of a few million to several billion stars) are the most numerous galaxies in the Universe, far outnumbering bigger like the Milky Way.  The physical processes affecting these small systems gives a more typical picture of the galaxy evolution.

In any galaxy stars are born when clouds of gas collapse under the force of their own gravity. But stars don’t keep being born forever- star formation in galaxies can shut off. The reason for this differs between galaxies, but sometimes, the galaxy’s own central black hole is the culprit.

Supermassive black holes can regulate their host galaxy’s ability to form new stars through a heating process. The black hole drives energy through powerful winds. When this wind hits the giant molecular clouds in which stars would form, it heats the gas, preventing its collapse into new stars.

Previous research has shown that this process can prevent star formation in larger galaxies containing hundreds of billions of stars – but it was believed a different process could be responsible for dwarf galaxies ceasing to produce stars. Scientists previously thought that the larger galaxies could have been interacting gravitationally with the dwarf systems and pulling the star-making gas away. 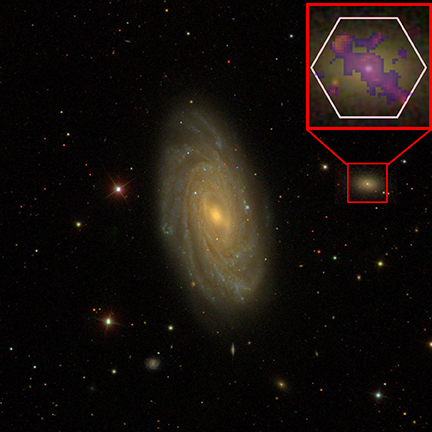 One of the dwarf galaxies that the team found to contain a red geyser. Its red colour shows it is no longer forming new stars. For size comparison, the dwarf galaxy is shown next to a galaxy similar to the Milky Way. The dwarf galaxy contains about 3 billion stars, while the spiral galaxy contains about 300 billion. The inset (top right) shows a larger image of the dwarf galaxy overlain with some of the MaNGA data for this galaxy, which revealed the winds from the supermassive black hole. Darker purple regions show gas heated by winds from the galaxy’s central black hole. These winds are what stops the galaxy from forming new stars. Image Credit: Samantha Penny (Institute of Cosmology and Gravitation, University of Portsmouth) and the SDSS collaboration.

This research was made possible by the Sloan Digital Sky Survey’s Mapping Nearby Galaxies at Apache Point Observatory (MaNGA) instrument. Whereas most prior surveys had looked at each galaxy as a single entity, MaNGA uses more than 1,000 optical fibres to make detailed maps of seventeen galaxies at a time, seeing each galaxy in detail all the way from its centre to its outskirts.

That’s not what’s written in textbooks, and these results potentially impact how we understand galaxy evolution. This discovery would not have been possible without the data from the MaNGA survey- both in its incredible detail and in its ability to see so many galaxies in such a short time.