The dark Universe is filled with shining galaxies. Galaxies shine in virtue of their stellar content and the emitted radiation reaches us from the most remote regions of the Universe. Stellar radiation can be modelled following robust physical principles, the light emitted by galaxies can be used as a probe of structure formation and evolution in the Universe and as a cosmic chronometer.
A galaxy contains million to billion stars. The total energetics emission of a galaxy is the sum of the light from all stars, which in turn depend at first on stellar energetics, lifetimes and the stellar initial mass function. It also depends on parameters that are specific of the different galaxies, such as history of star formation, chemical composition and dust content.

Theoretical spectral energy distribution of a model galaxy half billion years old with solar metallicity. From [1].

Stellar population models rely on the physics of stellar interiors and atmospheres, and analytical prescriptions for the star formation rate, and provide the integrated properties, in particular the Spectral Energy Distribution (SED), of model galaxies as a function of physical parameters, e.g. time, star formation history, chemical composition. Stellar population models are central to analysis in astrophysics and cosmology hence their use is widespread. In particular, they are the key tool for studying Galaxy Formation and Evolution.

ICG researchers Claudia Maraston and Daniel Thomas are world leaders in the field. Their seminal results are:
1. the inclusion of the Thermally-Pulsating Asymptotic Giant Branch stage of stellar evolution [1], that impacts on the interpretation of galaxies especially at high-redshift galaxies [2];
2. the account of non-solar element ratios in the model spectral lines [3,4], which has allowed to understand the formation timescales of elliptical galaxies [5].

Recent results include he calculation and analysis of models at high spectral resolution [6]. The figure shows how well the models fit real stellar populations. These models meet the advancements in new instrumentations and galaxy surveys, such as MaNGA. 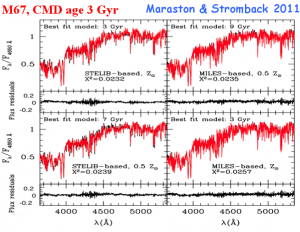 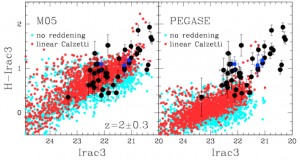 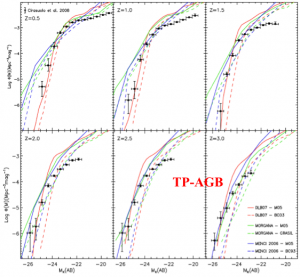 Galaxy luminosity function at various cosmic epochs modelled with different population models. The results with the models by Maraston (2005) are the solid lines, observational data are the black points with errorbars. From [8]