Astrophysical transients are phenomena that appear suddenly in the night sky, brighten for days to months and then fade away and disappear again. This includes novae (eruptions on the surfaces of white dwarfs), supernovae (the explosions of stars), tidal disruption events (stars ripped apart by black holes), and the still mysterious gamma-ray bursts and fast radio bursts. At the ICG, we specialise in the study of supernovae and tidal disruption events.

The violent explosions of stars, supernovae are some of the most energetic events in the Universe. At the ICG, we focus on three areas of supernova studies: progenitors, explosion physics, and cosmology. There are different types of supernovae and various types of stars; understanding which star ends up exploding as each type of supernova will advance our understanding of the life cycles of stars. Moreover, while we have a general idea of how different types of supernova explode (such as the internal collapse of massive stars or the thermonuclear explosion of white dwarfs), we still have to work out exactly how these explosions occur and understand the physics behind them. Finally, some types of supernovae can be used as cosmology probes. Type Ia supernovae have famously been used to measure distances to faraway galaxies and derive the expansion rate of the Universe. In the late 1990’s, this use of Type Ia supernovae led to the discovery that the expansion of the Universe was accelerating under the influence of a mysterious new phenomenon dubbed “dark energy.”

At the ICG, we are involved in several surveys that discover supernovae, study their properties, and use them in other experiments, such as cosmology and fundamental physics. 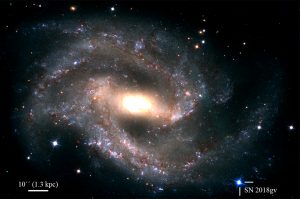 Stars straying too close to the super-massive black holes at the centres of galaxies will be ripped apart by the strong gravitational fields of the black holes. Half of the star’s mass will be flung away while the rest will spiral into the black hole. On the way, the infalling matter will emit a bright flash of light – a tidal disruption flare – that lasts for weeks to months. First predicted in the 1980’s, less than 100 TDE candidates have been discovered to date. At the ICG, we work on discovering TDEs in spectroscopic galaxy surveys (DESI, 4MOST) and studying the properties of the host galaxies of these events. This is an exciting new field of study, with plenty of open questions to pick from.