The very first scientific publication by the Sloan Digital Sky Survey IV international collaboration (http://www.sdss3.org/future/) is being led by a team from the ICG including David Wilkinson, Claudia Maraston, Daniel Thomas, and Lodovico Coccato. SDSS-IV will formally start in summer 2014, but prototype data within the survey MaNGA (Mapping Nearby Galaxies at APO) have already been taken and have now been analysed at the ICG. 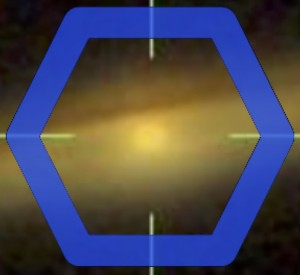 By means of a new software and state-of-the-art modelling developed by this team we can now investigate the internal structure of galaxies at unprecedented detail. The picture on the left is an image of one of the galaxies studied with the blue hexagon showing the area for which MaNGA data have been taken.

The figures below show the result of the modelling, the structure of stellar ages and mass surface densities across the object. There is clear evidence for the dense central regions hosting the oldest stars, which points to an inside-out formation mechanism. 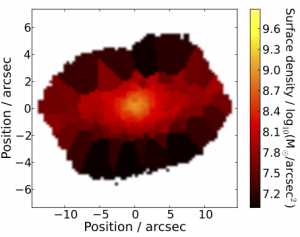 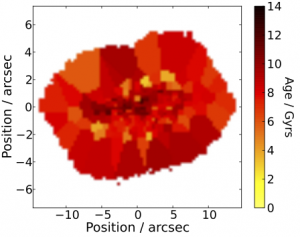 The present analysis will be applied to 10,000 galaxies over the 6-year lifetime of the survey, providing fundamental insight into how galaxies form and evolve.